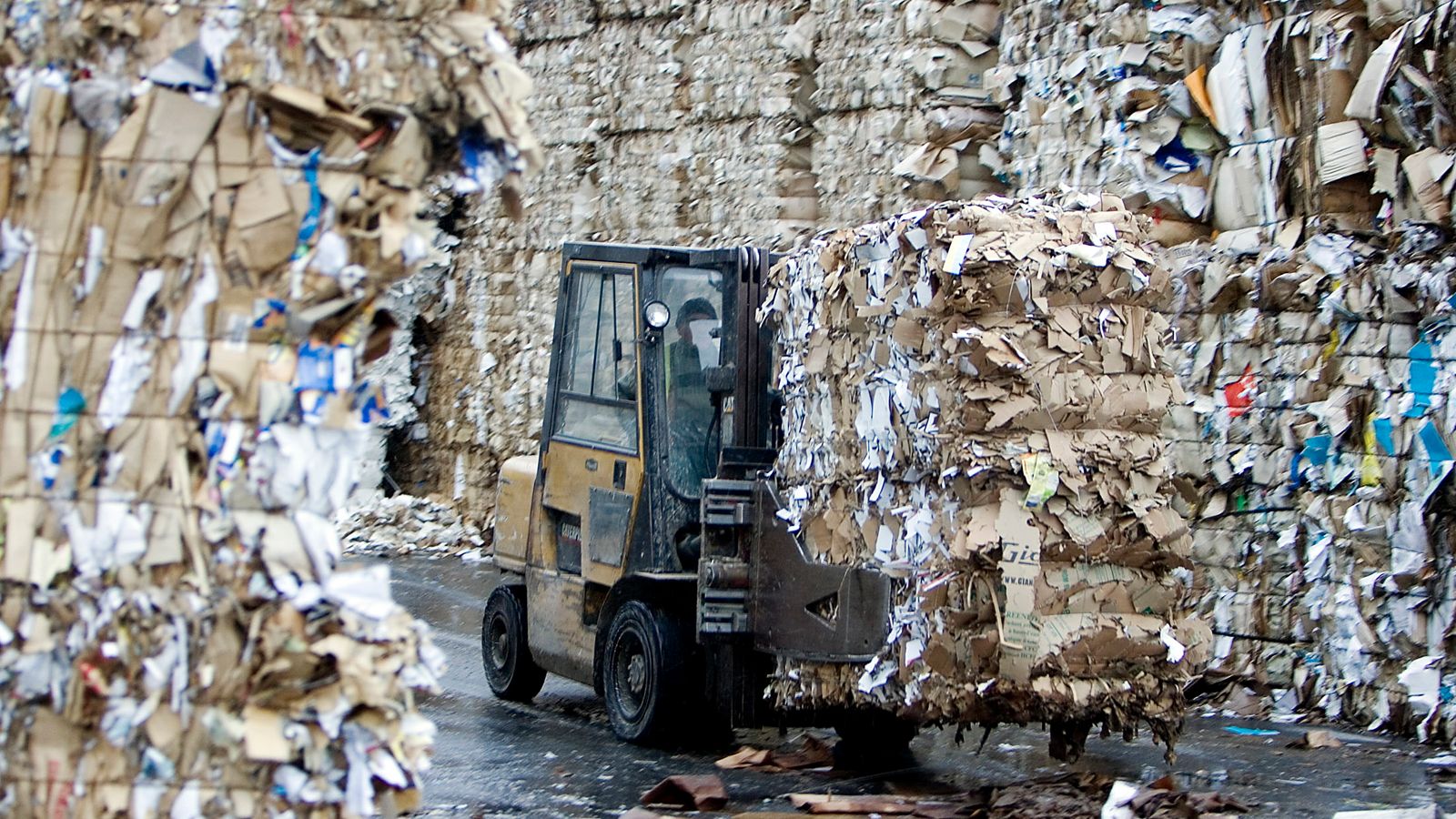 You can’t have Christmas without cardboard, or Boxing Day without a box for that matter.

Corrugated board and the paper from which it’s made – fibre as it’s known in the industry – is a fundamental raw material during the festive season.

Many parents will be familiar with a child enjoying the box more than the present that came in it.

But fibre is critical to the global economy all-year round.

Almost everything in your fridge, your front room, your medicine cabinet, as well as under the tree, will have been packed in, or with, corrugated board and paper.

And as with many crucial commodities, the pandemic has changed the market.

Demand has soared as lockdowns drove people indoors, entrenched working from home and accelerated the e-commerce and home delivery boom.

There were 5 billion parcel shipments in the UK in 2020, a 33% increase according to the Pitney Bowes Parcel Shipping Index. That’s 74 boxes per person.

But production of those parcels depends on recycling, and while consumption has soared here and around the world, the rate of recovery fell.

Government statistics for 2020 released this week show that while total waste from UK households increased by 1.8% to 22.6m tonnes or 399kg per person, recycling rates fell 1.2% to just under 10m tonnes.

A shade under 6 million tonnes of “dry material”, which includes paper and card, was recycled, down very slightly despite the increase in consumption.

For manufacturers, the decline in recycling rates has combined with increased demand to drive up prices.

“We’ve seen a huge increase in demand from our big customers for our product, and because it’s so sustainable, we can reuse it again and again and again,” said Miles Roberts, chief executive of DS Smith, one of Europe’s largest packaging manufacturers and its largest recycler.

“We’ve seen growth in e-commerce and about those changing shopping habits. Of course, a lot of these products go in boxes, because that provides the best protection for the products. And so we’ve really been benefiting from that, but it’s been a very challenging environment in terms of production.”

DS Smith makes packaging for clients including Nestle, Heineken, Glaxo SmithKline and Amazon, with a total output of more than 17 billion pieces a year.

Around 500 million of those are made at their largest UK plant, at Fordham near Newmarket, where the lifespan of a box from production to sale, delivery, recycling, pulping and re-manufacture is just 14 days.

Some 85% of the raw material comes from discarded fibre collected from local authorities, but Roberts says the decline in recycling rates has squeezed supply.

“What’s happened during this pandemic is that the amount of material that we’re able to collect, boxes and used newspapers, has reduced and that has caused some challenges in terms of that supply of the recycled material that we need to make our boxes.

“There have been other challenges. It could be in the availability of trucks and delivery, we’ve seen the cost of energy rise, we’re a heavy user of energy, and inevitably it has led to price increases.”

Roberts says the government could do more to help the industry by requiring local authorities to comply with a single set of regulations, ideally requiring households to separate paper and card so it remains dry.

“In the UK, there are nearly 200 different types of recycling regulations, right across virtually every council. So we’ve got to work with legislators, with the government, to ask how we can get a collection system where people can segregate their waste in the first place and make it easier to pick it up.”

The impact of soaring prices and demand has been felt across the business world.

Evolve, a growing organic cosmetics manufacturer and retailer based in Hertfordshire is among those that have felt the squeeze, caught between local supply problems and soaring import costs.

“We work with quite small cardboard manufacturers and they’ve struggled to get hold of the corrugated stock that we use for our finished products, and all of the stock boxes are made out of corrugated as well,” explains founder Laura Rudoe.

“We’ve had to use odd sizes of boxes, which has meant that we haven’t been able to ship things efficiently, we’re shipping air, which doesn’t help when we’re trying to be sustainable, and we have had to hold large amounts of stock just in case, which we would not normally do.”

Imports of gift set boxes from China meanwhile have been caught in the global container chaos, with shipping costs rising seven-fold in transit, wiping out much of the margin.

As a consequence, the company will look to domestic suppliers next year, a positive for the future that does nothing to mitigate the challenges of a difficult 2021.

“We’ve dealt with quite a few different issues, from Brexit to the pandemic, and that’s meant that there have been delays in supply chains and then also lots of disruption. It’s one of many things you have to solve as a business, but it won’t derail us.”

The rise in fibre prices should have offered a benefit to local authorities that collect the majority of the material in the UK. Rather than effectively giving it away to manufacturers, it is now an appreciating commodity.

The Local Government Association, however, says that many of its members are hamstrung by outsourcing agreements with the private sector. And environment spokesman Darren Rodwell says councils face their own supply challenges.

“Recycling is down a little but remember, we’ve been in the middle of a COVID pandemic, and we haven’t had enough lorry drivers,” he says.

“So across the country councils have struggled to get enough staff to drive the vehicles, these are HGV2 vehicles with additional licenses and we can’t pay what the private sector are paying.

“Of course, we’re having to really delicately balance what we can and can’t achieve, and that would cause a dip [in recycling]. But local authority workers have kept the country going throughout the pandemic, and the real issue is a lack of funding.”

When you are jumping on the recycling bin to fit it all in later this month, remember it’s not only the presents that are not just for Christmas.

Trump’s Mar-a-Lago search warrant cites 3 criminal laws. Here’s what we know
Tiny, radioactive capsule went missing. See where it was found
Ukraine War: Divisive choice to send Leopard 2 tanks to Ukraine
War in Ukraine: ‘This is not where Russia planned to be’
Retired general explains why tanks are so significant on the battlefield