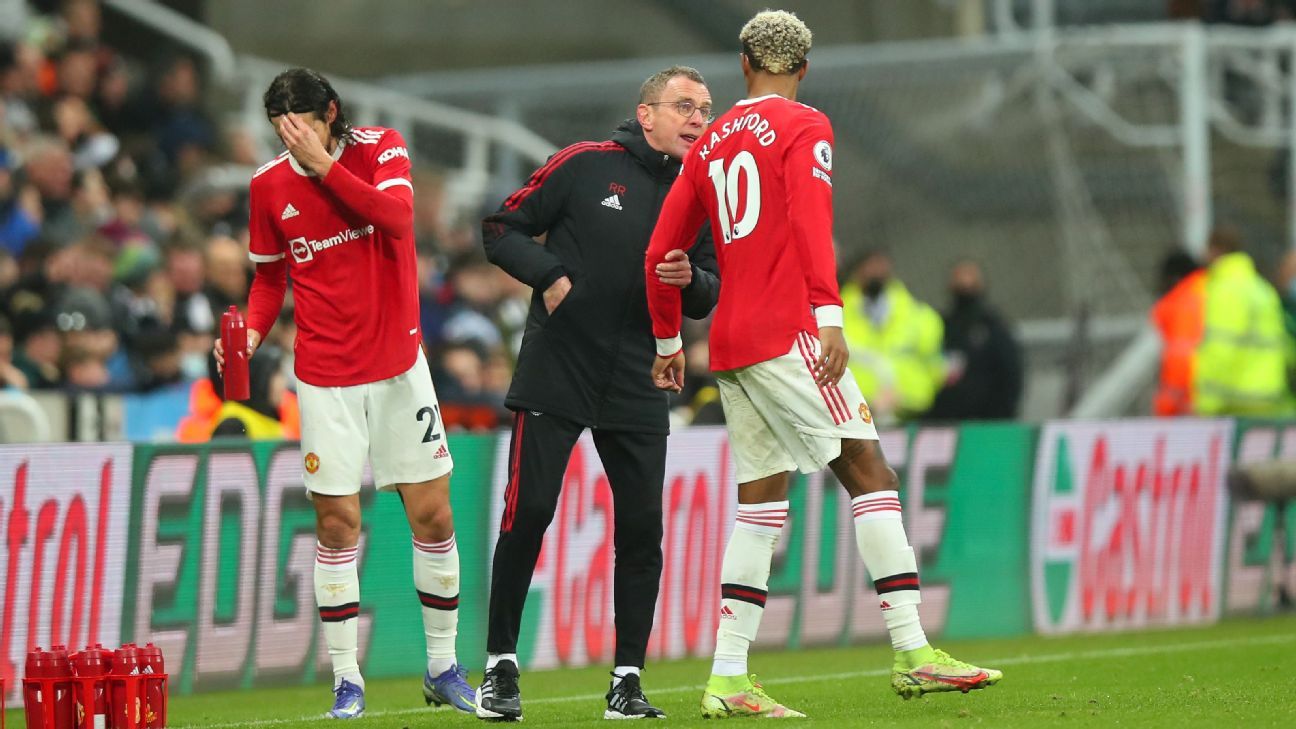 NEWCASTLE, England — Ralf Rangnick now knows the true magnitude of the job he has taken on as interim manager at Manchester United. When he wasn’t shaking his head on the touchline during a dismal 1-1 draw at Newcastle on Monday, Rangnick was rubbing his forehead in frustration.

The only positive for the man who replaced the dismissed Ole Gunnar Solskjaer earlier this month was that his team’s second-half performance was better than its first — but it would have been virtually impossible for Man United to have been any worse.

“I didn’t like the performance at all,” Rangnick said. “Today we didn’t control the game apart from a few moments. It’s all about energy, physicality and who wins the second balls. In all those areas we weren’t at our best. The good thing is we got a point but the performance needs to be better.

“You have to be ready and able to win those direct duels and this was not that often the case. When we were in possession we had too many giveaways and even with the goal, that doesn’t make things easy.”

Thanks to Edinson Cavani‘s 70th minute equaliser, which cancelled out Allan Saint-Maximin‘s 7th minute opener, Rangnick was able to extend his unbeaten start as interim manager to four games, but Man United have failed to impress in any of their games so far under the former Schalke, Hoffenheim and RB Leipzig coach.

They have laboured to 1-0 wins against Crystal Palace and Norwich City and ground out 1-1 draws against Young Boys in the Champions League and now against Newcastle at St James’ Park.

A new face in the manager’s chair tends to spark an initial upturn in performances and results as players who have failed under their predecessor find an extra level of commitment and quality in order to impress their new boss. However, the bounce under Rangnick has been pretty flat, at best, and now that the novelty factor has worn off following a month in charge, we are about to find out just how good he is both as a coach and manager.

We already know about Man United’s players. They showed their shortcomings during the run of four defeats in seven games, which cost Solskjaer his job. What Rangnick must now do is find a way to make those same players raise their game consistently enough to get Man United back in the race for top four and Champions League qualification — but considering their awful, disjointed first-half display against Newcastle, it won’t be an easy task.

There is some mitigation, of course, for Rangnick. This was Man United’s first game for 16 days following a COVID-19 outbreak at Old Trafford, which led to the postponement of fixtures against Brentford and Brighton, so there was always going to be an element of rust against Eddie Howe’s team.

But United have now been back in full training for a week, so there can be no excuses for the manner of their first-half display which saw them overrun by a Newcastle team that was given a football lesson in their last outing, when they lost 4-0 at home to Manchester City eight days earlier.

Newcastle, with just one win all season, dominated United in all areas of the pitch.

Cristiano Ronaldo was isolated up front as Newcastle nullified wingers Marcus Rashford and Bruno Fernandes. Meanwhile, Jonjo Shelvey and Joelinton, converted from misfiring striker to box-to-box midfielder by Howe, controlled the central third of the pitch against Fred and Scott McTominay. In defence, Harry Maguire and Raphael Varane played like novices at centre-half for Man United, with both losing their men and the ball on several occasions during an error-strewn performance.

There was no energetic and coordinated pressing by United, and certainly no control of the game. All the while, Rangnick watched on in a state of confusion and disbelief as his hugely expensive team performed like a group of strangers.

It wasn’t until Cavani, a half-time replacement for Mason Greenwood, entered the fray that United began to look like a team. The former Paris Saint-Germain forward always brings a supreme work ethic and tenacity when he plays, and it rubbed off on his teammates.

His equaliser, after he had missed an earlier chance, gave United a chance to win the game, but they failed to take advantage and ended up relying on goalkeeper David de Gea to earn a point with a stunning save to deny Miguel Almiron in stoppage time.

Dan Thomas is joined by Craig Burley, Shaka Hislop and others to bring you the latest highlights and debate the biggest storylines. Stream on ESPN+ (U.S. only).

“Our biggest problem was the mistakes we made,” Rangnick said. “Even when we scored the equaliser we were not really controlling the game and taking the right decisions.

“In three days we have the next game [against Burnley]. We can do better but we have to do it. We shouldn’t look for excuses — we need to be better and get more physical.”

United probably did enough to merit a draw against Newcastle, just about, but if Rangnick can’t inspire an upturn in performances, they will struggle to get anything against the better teams in the Premier League.

Rangnick needs to ensure his back line defends properly and somehow find a way to get his midfielders to look as though they can control a game and dictate the tempo of play. Fred and McTominay simply aren’t good enough, and there is no point in anyone at United pretending otherwise.

The manager must also work out why Rashford’s development has been stalled for 18 months now and why Jadon Sancho has been unable to replicate his Bundesliga form at Borussia Dortmund with United in the Premier League.

Rangnick is no fool, so he will know that jobs like the one at Manchester United don’t become available when all is going well. But he has a big reputation and Man United need him to live up to it by reviving under-performing players and finding replacements for those who don’t measure up.

The honeymoon period is definitely over, though. United have been failing for nearly nine years now and the problems run deep.