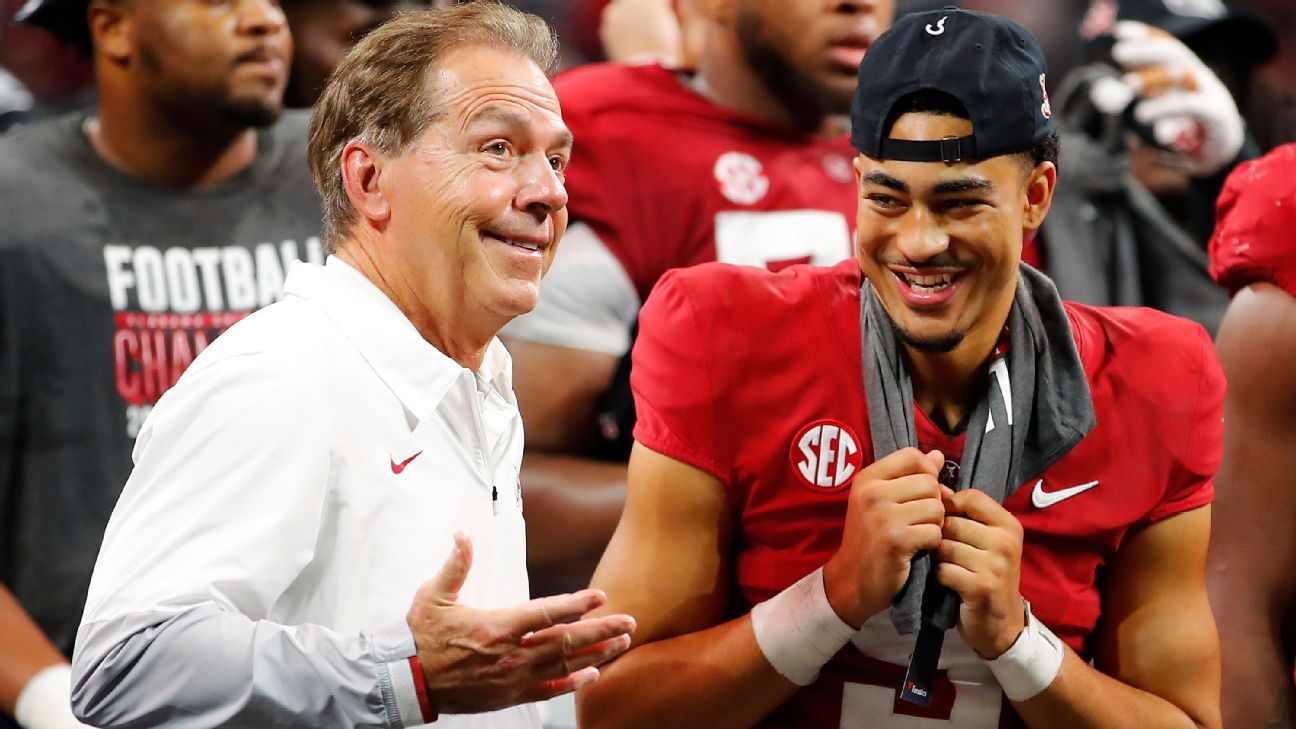 While Alabama might have taken a little longer to get on track this season than coach Nick Saban would have preferred, he said Thursday his patience wasn’t necessarily tested.

“I don’t have any patience, so anything that happens is a test of my patience, including sitting in this chair right now,” Saban joked during his final news conference on the eve of the College Football Playoff semifinal matchup against Cincinnati in the Goodyear Cotton Bowl Classic.

The Crimson Tide saved what was easily their best game of the season for the SEC championship game in a 41-24 thumping of then No. 1-ranked and favored Georgia. That’s after earlier in the season suffering their first loss to an unranked team (Texas A&M) since Saban’s first year in 2007, squeaking past a depleted LSU team by a touchdown and driving 97 yards in the final 1:32 of regulation to tie the game and win 24-22 in four overtimes against an Auburn team that had lost three straight was playing its backup quarterback.

“I think it’s always challenging when you’re coming off winning a championship for players to have the same hunger and sense of urgency to prove something,” said Saban, whose Crimson Tide went 13-0 a year ago to win their fifth national title in the last 10 years. “I think that is sort of a part of the human condition, that when you have success you want to be rewarded, you want to relax and can be a little complacent, so I don’t think it was unusual from that standpoint.

Alabama, a 13 ½-point favorite against Cincinnati, had 10 players from the 2020 team taken in the NFL draft, including eight in the first two rounds.

“You’ve heard me say before it’s what you choose to ignore sometimes that’s just as important to being successful as what you choose to buy into and commit to, and I think it just took a while for us to get everybody on the right track,” Saban said.

Saban said Thursday he’s not aware of any issues that would affect players’ availability in the game. He said starting cornerback Jalyn Armour-Davis has practiced some and would be a game-time decision.

“He’s a mature player and knows if he can go out there and do the job,” Saban said of Armour-Davis, who has missed the last two games with a hip injury. Getting Armour-Davis back would be big for the Tide, as senior cornerback Josh Jobe (turf toe) is not expected to play in the game. Freshman Kool-Aid McKinstry is in line to get his third straight start at cornerback.

Saban also said that freshman receiver JoJo Earle would be a game-time decision after missing the last three games with an injury. The Tide are already without starting receiver John Metchie, who leads the team with 96 catches. Metchie tore his ACL in the SEC championship game and is out for the season.

This will be Alabama’s seventh semifinal appearance in the CFP. The Crimson Tide are 5-1 in those contests, and all five of their wins have been by double digits.

Saban called Cincinnati “as good a team as we’ve played all year” on Thursday and likened playing in these types of games to a boxer in terms of being able to react to what the other team does.

“(The boxer) prepares for the fight, trains well for the fight, but he also has to respond to taking a punch, also has to respond to having a man rattled,” Saban said. “You have to have the mindset that you’re going to stay focused on what happens next, the next play and the ability to overcome adversity when you play good teams because you’re not going to win every single down.”

Saban, who’s 11-3 in CFP games/BCS national championship games, added that he’s been fooled in the past when it comes to knowing beforehand if his team is truly locked in for a big game.

“You never really know,” he said. “I can sit here and tell you that I can tell or can’t tell. There have been games when I was concerned that we had the right mindset and went out and played well, and there have been games I thought we were really ready to play and we didn’t play very well.

“You really never know until you get out there on the field and kinda start the game and see the look in their eye and how focused and how important it is for everybody to maintain intensity.”

Cincinnati coach Luke Fickell, whose Bearcats have won 23 of their last 24 games dating to the end of the 2019 season, said what Saban has done at Alabama, in his mind, is unprecedented.

“Not just getting to where he’s gotten to, but the ability to stay there,” Fickell said Thursday at his news conference. “I can’t say enough about him. I don’t know him that well. I’ve been with him maybe a couple of times. But for the last 10, 12, 15 years, I’ve studied pretty much everything that they’ve done as a program.”

Ex-Trump official reveals the moment he knew his job was at risk
What is the UN Security Council?
Bubbles freeze in -50C temperatures
What has Belarus got to do with the Russia-Ukraine conflict?
Hear what Putin critic thinks could lead to Putin’s downfall