Western officials have said they “hope and expect” Ukrainian forces to achieve success in a landmark offensive started this week against Russian-held territory in the south of Ukraine.

The officials described the operation into the Kherson region, to the west of the Dnipro river, as “sensibly limited” and an “important” attacking moment for Ukraine after more than six months of defending itself against Russia’s large-scale invasion.

Speaking on Friday, they said it would likely take time, would be deadly and cautioned against any “gigantic breakthroughs”.

The Western officials said it was important to consider the mission – officially launched on Monday – through a prism of what it could “reasonably achieve”.

Ukraine’s military commanders are deliberately concentrating their forces against targets in the south, with the retaking of Kherson city seen as a key prize, rather than aiming to launch offensive missions along the whole 1,500-mile-long frontline from east to south. 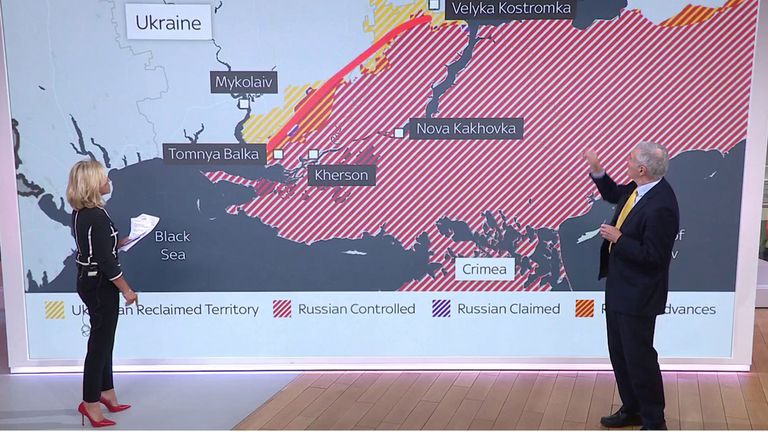 The offensive “has to be judged within its own terms, which… is around Kherson, west of the Dnipro [river] – that is the field of operations at present”, one official said.

“Let’s take it one step at a time and see how Ukrainian forces do over the next few days.”

A second official added: “It would be a really, really significant thing if the Ukrainian forces – as we hope and expect that they will – achieve the kind of success that [has just been outlined].

“It won’t end the war, but it would be really, really significant, partly because of the geostrategic importance of Kherson itself but also as a demonstration that Russia is a very, very, very long way away from having this war go its own way.”

Ukraine has restricted journalists from access to the offensive so it has not been possible independently to assess how the battle is playing out.

But the “signs are good at the moment”, the Western officials said.

“There are certainly signs that the Russians are dropping back but Ukraine themselves have already said that the offensive is a planned, slow operation to grind the enemy which will take time and effort, so I don’t think that we should be anticipating gigantic breakthroughs which completely change the picture and to be honest we are going to have to wait and see.”

The officials said they believe that Russia has some 20,000 troops in the area after having moved to bolster its ranks in anticipation of a Ukrainian counter-attack.