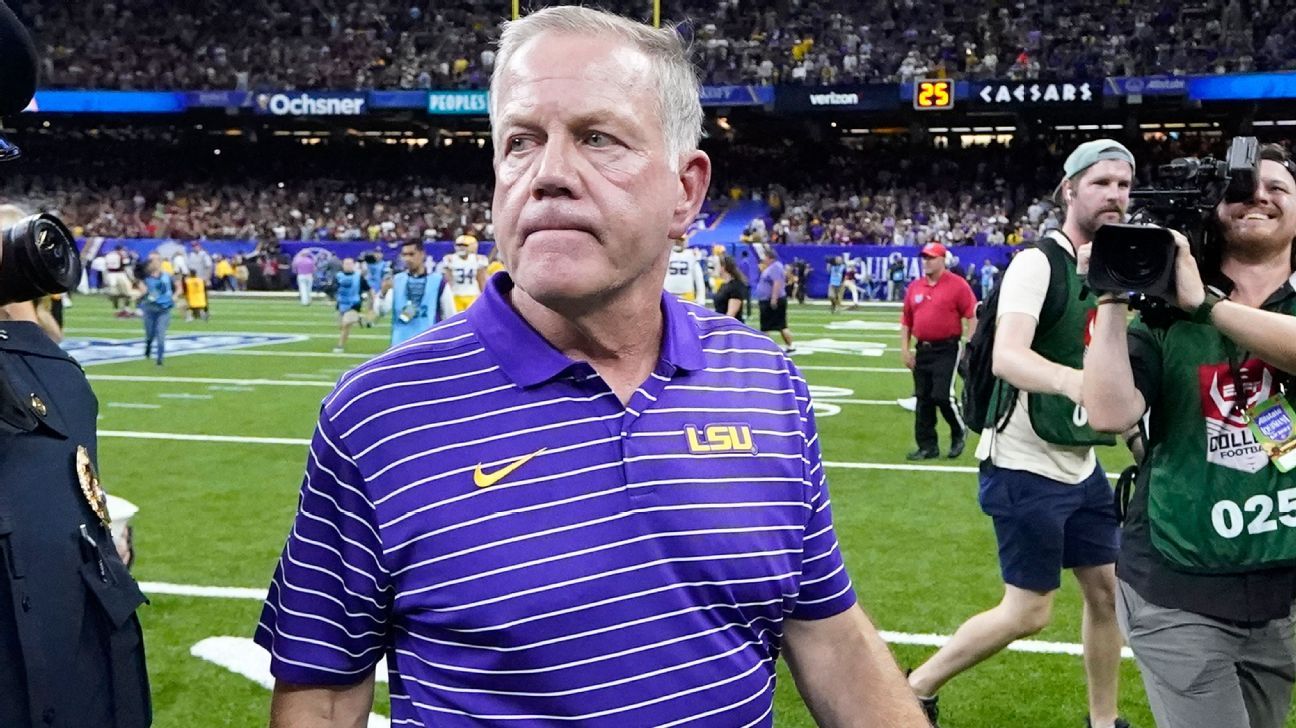 After rallying from 14 points down in the fourth quarter Sunday night against Florida State — and needing only an extra point to send the game into overtime — the Tigers saw their comeback bid come to an abrupt halt when Seminoles defensive back Shyheim Brown blocked Damian Ramos‘ kick to secure the 24-23 victory for Florida State.

It was the second blocked kick of the night for Florida State, which blocked an LSU field goal attempt in the first half.

But the Tigers’ struggles on special teams weren’t limited to the kicking game. They also failed to field a pair of punts, both of which the Seminoles recovered.

“Mistake after mistake for us, particularly in the first half,” Kelly said in offering his assessment of the game. “And, you know, obviously more mistakes in the second half.”

Kelly said he was proud of the way his team competed but also made it clear that “I’m not here to say we take any solace in a loss.”

“The reality is we’ve got some learning to do,” he added. “We’ve got to coach better, and we’ve got to play better.”

It was an inauspicious start to Kelly’s tenure at LSU. He became the first Tigers coach to lose his debut since Gerry DiNardo in 1995.

Kelly — who spent the previous 12 seasons at Notre Dame, posting a record of 113-40 — signed a 10-year, $95 million contract to join LSU in late November, replacing Ed Orgeron, who was out less than three years after winning the national championship.

Kelly remade the roster during the offseason, adding a number of transfers, including starting quarterback Jayden Daniels from Arizona State.

Down seven points on the 2-yard line with only 1 second remaining, Daniels threw what appeared to be the game-tying touchdown to Jaray Jenkins, before the blocked extra point. Playing behind a struggling offensive line, Daniels was 26-of-35 passing for 209 yards and two touchdowns with no interceptions. He also ran the ball 16 times for 114 yards.

“Their front is very good,” Kelly said. “They brought a lot of pressure. Their defensive ends were a challenge for a true freshman [left tackle Will Campbell] and our right tackle [Cam Wire]. They battled.”

LSU star wide receiver Kayshon Boutte — a possible first-round pick in next year’s NFL draft — had a pair of drops and was held to two catches for 20 yards.

Boutte appeared to be visibly frustrated at points during the game.

“Here’s a great player trying to make plays, maybe trying to do a little too much and trying to catch the ball before he had it,” Kelly said. “I wouldn’t read too much into it. I think he learned tonight that he’s just got to let the game come to him.”

In the first quarter, LSU lost its standout defensive tackle, Maason Smith, to a knee injury. The former Freshman All-SEC selection returned to the sideline after halftime wearing a leg brace and was walking with the assistance of crutches.

Florida State quarterback Jordan Travis evaded the LSU rush for most of the night, completing 20 of 32 passes for 260 yards and two touchdowns with no interceptions. He finished second on the team in rushing with 31 yards on eight carries.

It was the Seminoles’ first win against an SEC team since beating Florida in 2017.

“What we learned is we’ve got to coach better,” Kelly said. “We’ve got to have our kids coached in a manner where they’re ready. And I’m accountable for that.”