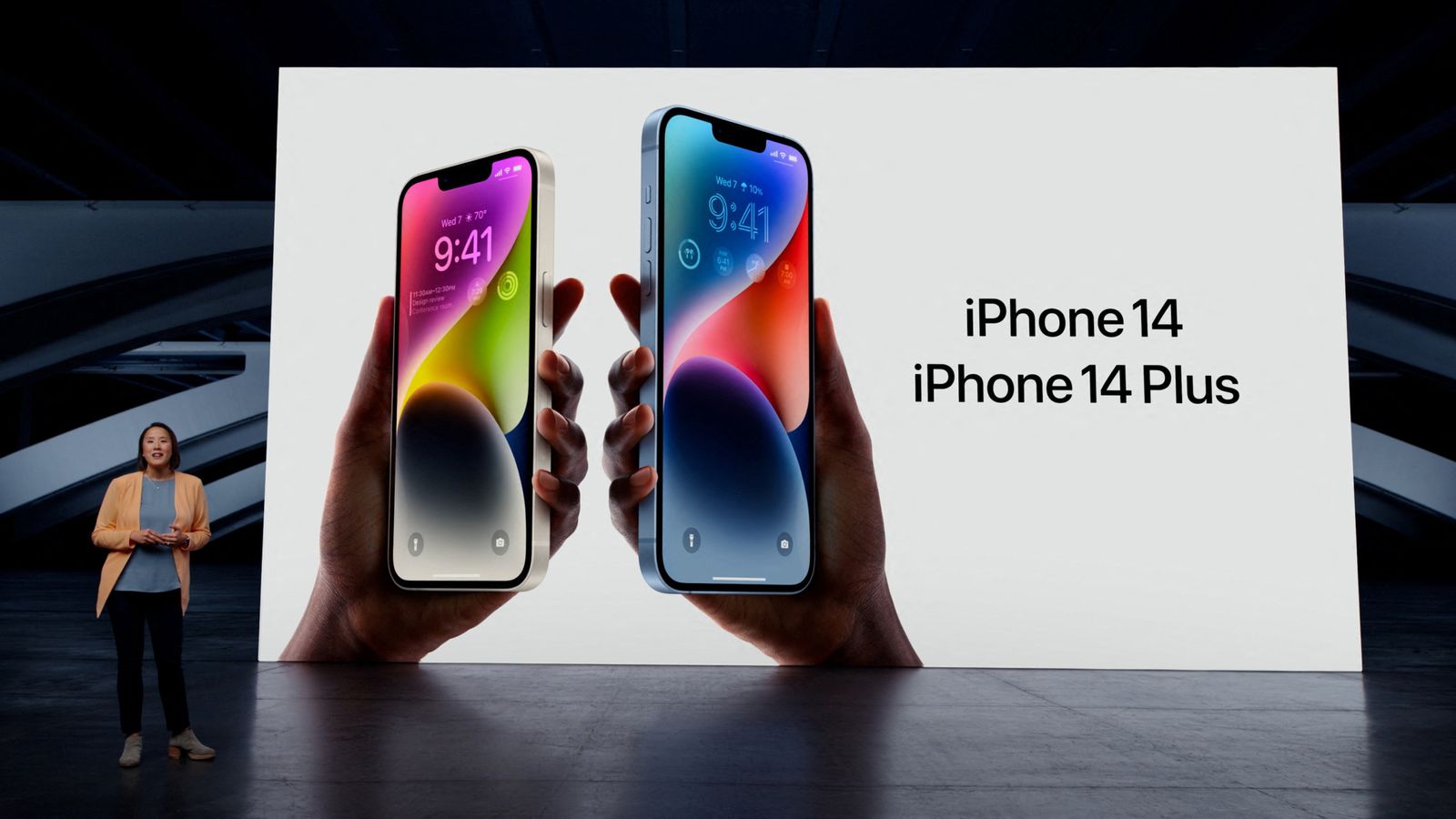 Apple has launched the iPhone 14 as its “most advanced” smartphone yet – with longer battery life and a series of camera upgrades.

Its four new models are between 6.1 and 6.7 inches in length, meaning they have larger screens than the iPhone 13.

They can also last all day on a single charge.

However, one expert noted that Apple had reserved the “biggest leaps” – such as a more powerful processor – for the Pro, its more expensive handset.

The iPhone 14 and 14 Plus come with an upgraded 12 megapixel main camera, featuring a brighter flash, wide angle capability, and an action mode for video that adjusts to shaking, motion and vibrations.

The more expensive Pro and Pro Max handsets have a 48 megapixel camera.

All four phones are equipped with a larger light sensor which can produce low-light photographs twice the previous generation’s quality.

“Low-light photography has always been a challenge given the sensor size in mobile phones,” Ru Bhikha, mobiles expert at the prime comparison site Uswitch.com said.

“So any sort of improvements there, given the amount of pictures we take on a daily basis, will definitely be seen as a worthy upgrade compared to the iPhone 13.”

However, while the standard iPhone 14 uses its predecessor’s A15 bionic chip, the Pro will be equipped with the faster A16 chip.

“Apple has stuck to its guns and reserved its biggest leaps in innovation for its most premium handsets, despite the economic challenges facing many consumers,” Mr Bikha noted.

Similarly, the Pro versions boast an “Always-On Display”, meaning users can see basic notifications while the screen is locked.

Unveiling the feature at a virtual event, Apple executive Greg Joswiack said: “It’s easy to see the time and other core information without raising your iPhone or tapping the display.

“This keeps the central information available for the moments where all you need is just a glance… this is the most advanced display we’ve ever shipped.”

Mr Joswiack added that it was made possible by the Pro’s “incredibly power-efficient” display, which operates with a refresh rate as low as 1Hz.

Apple has ditched the iPhone mini seen in previous generations – the “cheapest and most pocket-friendly phone from the main series”, Mr Bikha said.

The new phones have also left behind the SIM card tray of previous models, enabling users to connect to networks and swap SIM cards digitally.

Meanwhile, the iPhone 14 and 14 Plus will also have an “Emergency SOS” feature which will mean users can still get help by phone if they are out of range of a mobile signal.

Apple said the feature will show a user where to point their phone to connect to a satellite.

They will be guided through a questionnaire and follow-up messages which will be sent to centres staffed by Apple-trained specialists who can call for help on their behalf.

Users will also be able to manually share their location over satellite with “Find My” when there is no mobile or wi-fi connection.

Emergency SOS via satellite will be available to users in the US and Canada in November, and will be free for two years.

There were no details given on when or if the service would be available to users in the UK.

Read more:
Apple employees fight back against Tim Cook’s return-to-office order
What is the new serious Apple vulnerability and how do you protect yourself from it?
Apple discloses serious security vulnerabilities for iPhones, iPads and Macs

The virtual event also saw the unveiling of the Apple Watch Ultra, which the company’s chief operating officer Jeff Williams labelled “the most rugged and capable Apple Watch yet”.

It is aimed at those taking part in extreme sports – such as deep-sea diving – and is fortified by titanium casing and a sapphire crystal display protector.