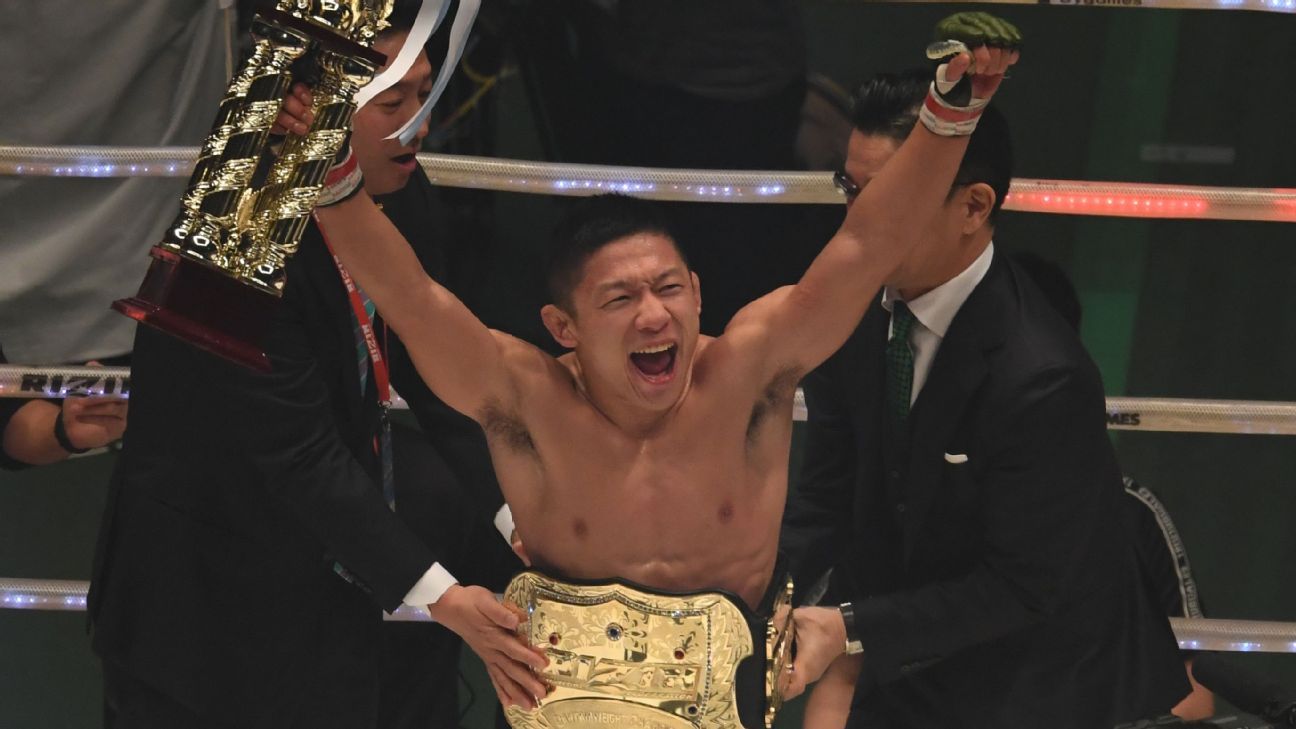 COCONUT CREEK, Fla. — Kyoji Horiguchi laughs when he recounts the story. It was 2019, and after his coaches and teammates at American Top Team (ATT) urged him to put down roots in the area, he finally bought a house in South Florida.

Horiguchi, the current Rizin bantamweight champion and former Bellator bantamweight champ, had been training at ATT for nearly five years before making the purchase. During that period, when Horiguchi wasn’t in his home country of Japan, he was at the gym — either training or sleeping.

The former UFC flyweight title challenger was the only long-term resident of ATT’s dormitory, which is upstairs from the first-floor mats, cages and workout equipment. And even after he bought his new home 10 minutes away from the facility, there was comfort and familiarity in the dorms. Horiguchi still packed up his gear and went upstairs to that same tiny single room. He didn’t sleep in his new home for months.

“I like training,” Horiguchi said with a chuckle. “So, it’s easier to get there. That’s why.”

The tale has been repeated inside the walls of American Top Team ad nauseum since then. The executive team of owner Dan Lambert, general manager Richie Guerriero and head coach Conan Silveira even decided to name the dorm “Horiguchi Hall” after its most tenured resident.

The superlatives thrown around about Horiguchi at ATT are enough to make the most bombastic politician blush. Some say he’s the best fighter on the team, which also happens to boast the greatest woman fighter of all time in Amanda Nunes, and Dustin Poirier, who is coming off back-to-back finishes of Conor McGregor. Others refer to Horiguchi as the most unheralded fighter on Earth, potentially the best in the world in two divisions.

On Friday, Horiguchi gets a chance to substantiate all those lofty plaudits when he challenges Sergio Pettis for the Bellator bantamweight title in the main event of Bellator 272 at Mohegan Sun Arena in Uncasville, Connecticut (Showtime, 10 p.m. ET; prelims on YouTube at 7 p.m.). Horiguchi vacated that same title in November 2019 due to a torn ACL, never losing it in the cage. He regained the Rizin title last year and vows to add a second gold belt to his collection yet again.

“That’s my belt,” Horiguchi said. “Right now, Sergio has a fake belt. I will get the belt back. Of course.”

When Horiguchi approached Lambert to greet him after training, about two weeks out from the Pettis title fight, the gym owner told him that a Japanese television station had requested an interview later that night. This might seem the norm for a Japanese fighter, but it is not. While success inside the cage has been persistent, press coverage has been difficult to come by for Horiguchi, whether it be in the United States or Japan. So, Lambert chalked up that media inquiry as a victory.

After Horiguchi agreed to the interview and walked away, Lambert reinforced Horiguchi’s pedigree as a fighter, referring to him as “the best fighter at the gym.”

That might be a hard statement to digest for outsiders, coming from the owner of a team that has Nunes and Poirier, plus Jorge Masvidal and PFL women’s lightweight champion Kayla Harrison, a two-time Olympic judo champion. But it’s not bluster. Horiguchi’s peers agree.

“There’s just no one that works harder than him,” Harrison said. “He’s very gifted naturally. For whatever reason, he’s like a super athlete ­– like ridiculously strong, ridiculously fast, ridiculously good hand-eye coordination, instincts. All of it. He’s got the mind of a f—ing samurai monk. And no one trains harder than him. He’ll outwork you every day of the week that ends in ‘y.’ He’s impressive.

“He’s definitely the best fighter on the team, for sure. Just all around.”

Horiguchi, 31, is 11-1 since departing the UFC as a free agent in 2017. He has won 14 of his last 15 fights, including his last three in the UFC. Horiguchi left the Octagon four years ago for two primary reasons: Rizin was offering more money, and one of his main goals was to lift MMA in Japan, where the sport was once wildly popular. The only man who defeated Horiguchi during his eight-fight run in the UFC was all-time great Demetrious Johnson, in a flyweight title fight in 2015.

Despite that impressive résumé, those at American Top Team believe Horiguchi doesn’t get the respect he deserves. Horiguchi’s head coach, Mike Brown, says Horiguchi is “definitely the most underrated fighter on the planet.”

Brown may have a point. ESPN does not have Horiguchi ranked in the top 10 at flyweight or bantamweight currently, though that is likely to change if he beats Pettis.

Brown believes one of the issues is that Horiguchi’s recent accomplishments have come outside the UFC. He’d love to see him back in the sport’s most prominent promotion if it is willing “to pay what he’s worth,” but even with his fighter competing in Bellator, Brown has no doubt about where Horiguchi stands in MMA. “This guy could beat anybody on the planet in two different weight classes,” Brown said.

The last two years or so have slowed Horiguchi’s momentum. In August 2019, upstart Kai Asakura stunned Horiguchi, knocking him out in a non-title bout. Two months later, Horiguchi tore his ACL and was told he needed surgery, spoiling a New Year’s Eve 2019 rematch with Asakura. Horiguchi had to relinquish both the Rizin and Bellator titles.

The timing was devastating. Rizin had been positioning Horiguchi as its top star. He even held his own in a highly publicized 2018 kickboxing match loss to phenom Tenshin Nasukawa. Being a crossover star in Japan is important to Horiguchi, who wants to follow in the footsteps of his late mentor Norifumi “Kid” Yamamoto, who was the biggest MMA draw in Japan during the aughts — a red-hot period of time for MMA in the country.

“When I was a kid, I saw him — I saw many of his fights,” Horiguchi said. “It was amazing. Then, I want to be like him. I want to give back to Japanese kids the way that he did to me. That’s why. My goal is every organization’s belt, I want it.”

Yamamoto died of stomach cancer in September 2018 at the age of 41. Like “Kid,” his former coach with the Krazy Bee team in Tokyo, Horiguchi wants to elevate the popularity of MMA in Japan.

And despite the setbacks, Horiguchi has already begun his climb back to the top, although it’s been slow. He returned to Rizin in December 2020 and avenged his loss to Asakura, knocking him out in the first round. Due to COVID-19 travel restrictions, including a 14-day mandatory quarantine when arriving in Japan, Horiguchi decided to sign as a full-time Bellator fighter in September. He will still keep the Rizin title and the plan is for him to return home in 2022 to defend it, as Bellator and Rizin have a strong working relationship.

Next on Horiguchi’s list is Pettis and the belt that he never lost in the cage. That could give way to a major 2022 when maybe, just maybe, Horiguchi will start getting the kind of recognition from the public that people like Lambert and Brown have been shouting from the proverbial rooftops for years.

Horiguchi appreciates the compliments from coaches and teammates, and he thinks they originate as much from his demeanor as his abilities. He’s been in martial arts since he started with karate at 5 years old, and he describes training as his “lifestyle.” Horiguchi said the only other things he does are fish and take care of his new dog, a pitbull named ROI.

None of it — his demeanor, his work ethic or his abilities — seems likely to change any time soon. It has been a couple of years since he reluctantly departed what is now called Horiguchi Hall, but his mentality towards training — the work ethic that got him to the top in Rizin and Bellator — isn’t going anywhere.

“Still inside, it’s the same,” Horiguchi said of his philosophy. “Not gonna change. I’m not like Conor McGregor. I’m humble. Always training.”

CNN reporter has close call with Russian missile
How did the US shoot down China’s ‘spy balloon’?
Tiny, radioactive capsule went missing. See where it was found
‘He didn’t just break the law he broke my heart’: Navy veteran on George Santos
Putin’s threat over Western arms supplies