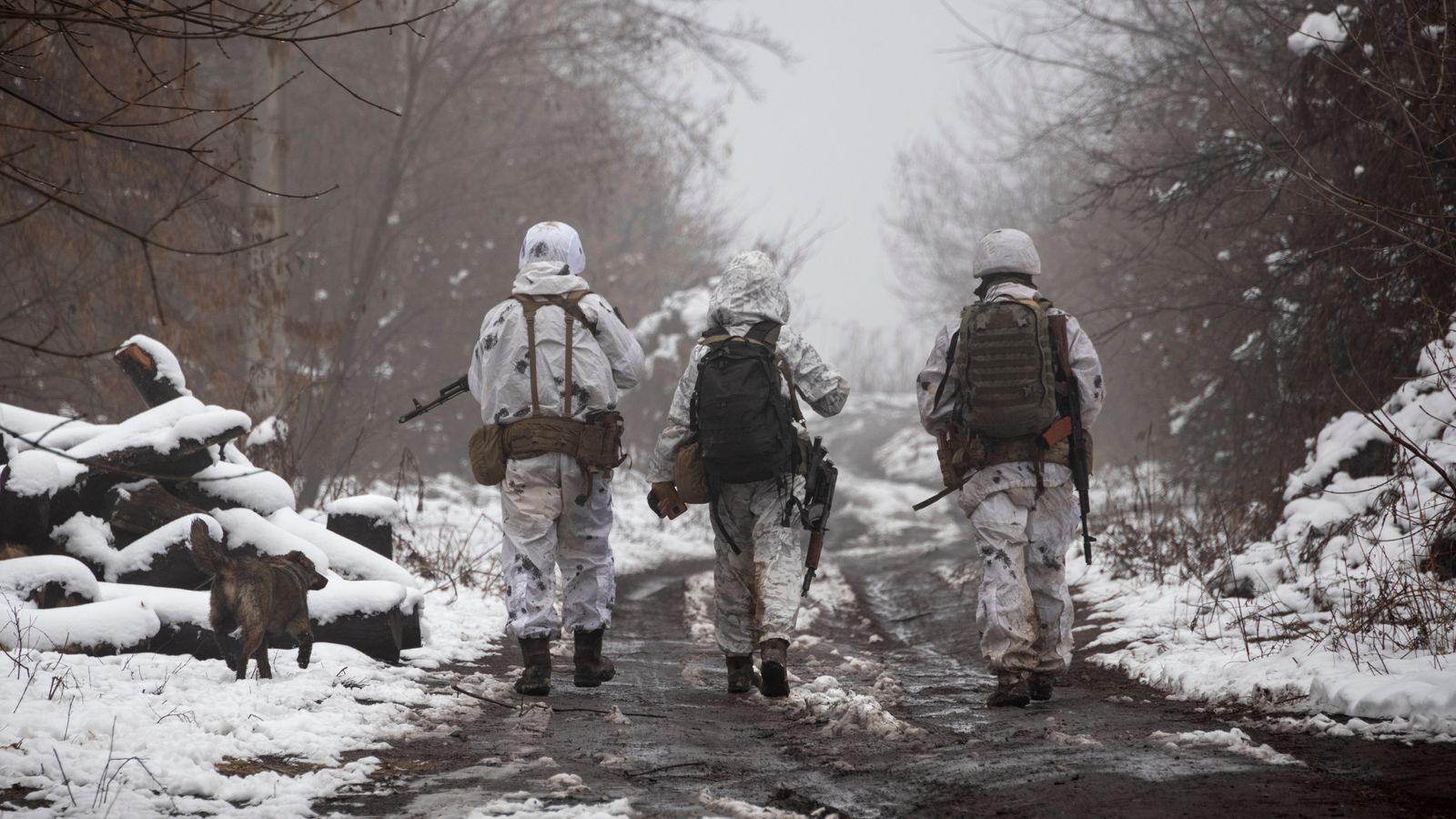 A full Russian invasion of Ukraine would be on a scale “not seen in Europe since World War Two”, the new head of the armed forces has warned.

Admiral Sir Tony Radakin described as “deeply worrying” an escalating crisis over Ukraine – where a build-up of tens of thousands of Russian troops has raised Western fears of a new armed incursion, almost eight years on from Russia’s annexation of Crimea.

The comments came as Ukraine’s foreign minister told Sky News, “there would be a lot of dead Russian soldiers” if President Vladimir Putin decided to invade.

Will Russia go to war with Ukraine?

Dmytro Kuleba said he was working with allies like the United States and the UK on ways to deter the Kremlin but signalled that the Ukrainian military was ready to defend the country.

“We – together with partners – we have to make this price unbearable for Putin,” the foreign minister, on a trip to London, told Sky’s Dermot Murnaghan in an exclusive UK broadcast interview.

“They [the US and other allies] can strike economically. We will be fighting on the ground. I am sorry to say that, but there will be a lot of dead Russian soldiers, and we hope President Putin does not want that to happen.”

He described a three-pronged approach to trying to dissuade renewed Russian aggression – through political messaging, sanctions and closer military cooperation with partners.

Mr Kuleba said he did not expect NATO forces to fight Russia alongside Ukrainian troops should deterrence fail, but he expected their support.

He said: “What we are asking is to help us to avoid the war or if we are left with no alternative because of Russia’s willingness to launch a war, then help us to strengthen our army.” 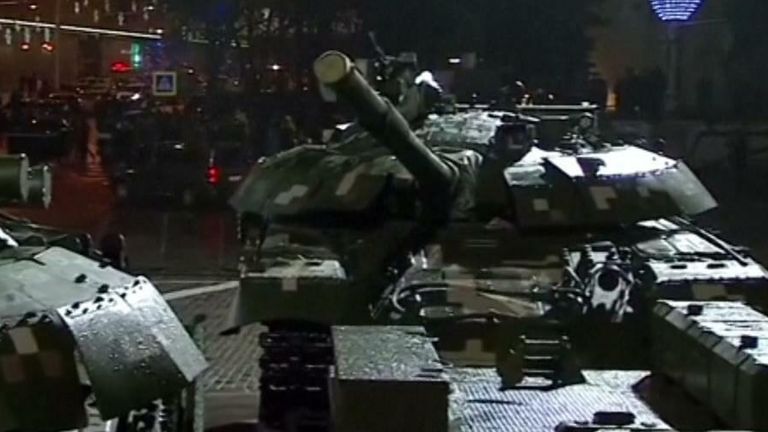 The crisis is being watched closely by Admiral Radakin, who took over as chief of the defence staff at the end of last month.

“It is deeply worrying,” he told a small group of journalists on Tuesday evening after delivering his first speech in his new post, referring to the Russian troop movements.

Russia denies it is mobilising for military action

British and US officials have repeatedly said they do not know what President Vladimir Putin intends to do in Ukraine, but they believe one option is the potential for a multi-front offensive as soon as early in the New Year, involving up to 175,000 military personnel.

Around half of that number is already thought to be close to the Ukrainian border.

“The significance of the worst scenarios in terms of a full invasion of Ukraine would be on a scale not seen in Europe since World War Two,” Admiral Radakin said.

Troop movements have been coupled, Western officials say, with a spike in anti-Ukraine, pro-Russia disinformation to try to influence opinion on the ground – as happened during the annexation of Crimea and a Russia-backed conflict by separatists in the east of the country.

Russia has repeatedly denied allegations that its forces are being mobilised for military action, accusing Ukraine of being the aggressors.

Russia-Ukraine border: What is happening and will tensions lead to war?

Seeking to de-escalate tensions after days of increasingly hostile rhetoric, US President Joe Biden held a video conference on Tuesday with Mr Putin.

The two sides said they will keep speaking at a lower level, with another discussion between the two leaders also on the cards.

Washington and Moscow offered their own interpretation of the top-level discussion, which lasted about two hours.

Mr Biden’s team said he warned his Russian counterpart that the US and its allies were preparing “strong economic and other measures” to punish Moscow should Russian forces invade Ukraine.

This could include the scrapping of a gas pipeline from Russia to Germany called Nord Stream 2.

Ukraine is not a member of NATO, so does not benefit from a pledge of collective defence enjoyed by all allies.

But the US has signalled it is ready to deploy more troops to eastern NATO member states – the Baltics and Poland – to shore up their defences.

At the same time, a senior Russian official said Mr Putin had conveyed how the Kremlin was “concerned by the growing military activities of Ukraine and NATO in the direct vicinity of Russia’s borders”.

The Russian leader repeated a request for guarantees that the Western alliance would halt its expansion eastwards – Ukraine has said it would like to become a member state – and not deploy missiles to Ukraine.

Mr Biden spoke with European allies, including Boris Johnson, before his dialogue with Mr Putin – in a bid to present a united front.

The chiefs of the defence staff of NATO’s 30 member states also held an extraordinary session on Monday to discuss the Ukraine crisis.

The convening of such a meeting – which took place virtually – is a sign of the gravity of the situation.